How Can you Travel to Cuba? 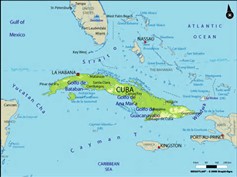 In a statement issued by President Obama on December 17, 2014, he stated “Today, the United States of America is changing its relationship with the people of Cuba.” In that same statement, President Obama stated he instructed Secretary Kerry to immediately begin discussions with Cuba to reestablish diplomatic relations that have been severed since January 1961. President Obama then went on to say “we are taking steps to increase travel, commerce, and the flow of information to and from Cuba.”

Focusing on the lighter side of this proposed policy is the idea that those governed under the United States jurisdiction can now travel to Cuba. Can we? Under limited circumstances, we can. On January 15, 2015 travel restrictions to Cuba were relaxed a little. There are now 12 categories of activities which allow for a person to travel to Cuba. The Office of Foreign Assets Control (OFAC) of the US Department of the Treasury administers and enforces economic and trade sanctions based on US foreign policy. Per the OFAC, the 12 categories of activities which allow for a person to visit Cuba include: “family visits; official business of the U.S. government, foreign governments, and certain intergovernmental organizations; journalistic activity; professional research and professional meetings; educational activities; religious activities; public performances, clinics, workshops, athletic and other competitions, and exhibitions; support for the Cuban people; humanitarian projects; activities of private foundations or research or educational institutes; exportation, importation, or transmission of information or information materials; and certain authorized export transactions.” Needless to say a person may not travel to Cuba for tourist activities.

On July 08, 2015, direct flights originating from Orlando International Airport to Cuba began. Once a person qualifies under one of the above listed categories, he/she must go through a third party charter company in order to book a flight and also to receive a visa to travel to Cuba, even though Jet Blue travels directly to Cuba. This is a result of the current civil aviation agreement between the countries. So what happens when a person arrives in Cuba? There is some debate whether the infrastructure in Cuba is able to handle American travel there. It is important to know, Cuba has been accommodating the Europeans during the entire time the United States’ embargo was in place. According to friends who have traveled to Cuba, “there is nothing to worry about.” Your tour company is able to assist with living accommodations, tours, and everything else a traveler may need. It is suggested by the US Department of Treasury, a person check with their bank to confirm “whether the institution has established the necessary mechanisms for its issued credit or debit cards to be used in Cuba.” If a person intends on using U.S. currency in Cuba, there is a 10% tax to convert your U.S. currency to the Cuban peso.

Persons returning back to the United States may return with accompanied baggage merchandise acquired in Cuba with a value not to exceed $400 per person, including no more than $100 in alcohol and tobacco products.